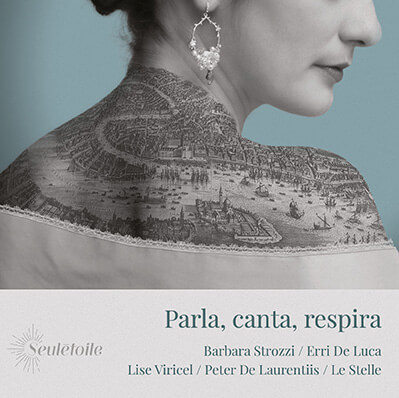 You can listen to the record on the streaming sites

An exceptional woman, called up in a sensory way by two voices answering each other across the centuries. In reply to Barbara Strozzi’s madrigals, this record offers a dialogue between the music of the past and Erri de Luca’s contemporary poetry.

“We know that Barbara Strozzi was a singer, that her writing showed a contrapuntal audacity and a strong knowledge of the singing voice. Her work also shows a deep and touching sensitivity to poetry, shown by the care she took with prosody. I wanted to give her a voice by highlighting the soprano voice, in this record dedicated to her. ” Lise Viricel

Genesis of the project and biographies on Lise Viricel’s website

The programme Parla, Canta, Respira was supported by Cité de la Voix (City of the voice)